Spice Up Your Health 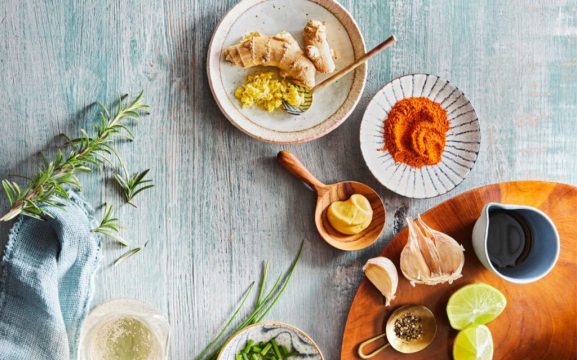 One of the major challenges all dialysis patients face while eating or relishing a meal is the flavour to their diet which is primarily through salt.

The absence of salt in dialysis diet decreases the flavour in your foods, so you can add “extra flavour” using spices and herbs to your food. Spices are used in its dried form, either whole or ground, and herbs are used fresh or dried. Research suggests potential benefits of spices and herbs, which are rich in antioxidants and excellent sources of other vitamins and minerals.

Cinnamon can easily be added to your tea, sliced portion of apples or baked apples to make an evening snack

GINGER: Ginger is considered another “tonic” spice, meaning it is just good in general. It is high in antioxidants that fight disease and has anti-inflammatory properties. Ginger can be used to treat nausea/vomiting or morning sickness which are some of the symptoms seen in dialysis patients.

A quarter piece of ginger I.e., 5gms can be used every day in your tea or as a flavouring to your breakfast delicacies like Upma

GARLIC: Through the years, Garlic has been used to fight heart disease, cancer, infections and even mosquito bites.

OREGANO: Oregano is gaining in popularity as a bacterial killer, an antifungal agent and is considered to have germ busting properties.

Oregano can be used to give your pizza or pasta the flavouring instead of tomatoes which are high in potassium. Oregano can also be added to leached boiled vegetables to flavour them.

It is very easy to cut down on salt and salt substitutes when you have a range of spices that you can easily use in your foods every day without feeling that your “missing out” on something in your meals.